Skip to content
Home > Business > Who are the worst drivers on the road?
Published May 12, 2016 by Dori

Who are the worst drivers on the road?

During college, I had a roommate who adamantly proclaimed that the worst drivers on the road came from Idaho.  As a passenger in her car, I often held a white knuckle death grip on the door handle as she weaved in and out a traffic with near misses and stopped short at every intersection.  I never felt safe while in her vehicle and had the opinion that she herself, was the worst driver on the road.  She was from Canada and I, having learned to drive in California, where routine stops without stopping are commonplace and merging in traffic is fundamental to survival, made me the authority and therefore correct in my assumption.

A study from two physiologists, Dunning and Kruger, states that individuals often think higher of their own skills comparatively, despite higher aptitude and execution that others may have at a given skill. We are inept at gauging our skills in spite of evidence that may support the opposite of our belief.  That bias often impedes an individual from accurately recognizing their own inadequacies or prowess.  Simply put, we think we are greater than we actually are. We focus on the mediocre abilities of those around us versus wanting to identify and improve our own shortcomings and weaknesses.

An interesting point in the Dunning and Kruger study is that when individuals are trained to become better in a skill, only then do they recognize their initial weakness in the area.  For instance, only after Danika Patrick had coached me on how to effectively pass on a corner, would I recognize that maybe learning to drive in California hadn’t groomed me appropriately for the racing track of daily commutes.  To quote Confucius, “Real knowledge is to know the extent of one’s ignorance.”  We can benchmark ourselves better after having been trained in a particular competency.

With that being said, why wouldn’t we constantly seek to improve ourselves by learning and refining skills that we may already feel equipped with?  We are never too good, never too old and never too skilled to improve.  Identifying our deficits can give us the upper hand as we focus more on our own performance than that of others.  We take responsibility for our progression and effectiveness.  Sometimes improvement may be meager and slow to track, but in doing so we will achieve personal record after personal record.  Make yourself your own yardstick for improvement and dedicate time for personal development. Become the best driver on the road rather than the worst.

Happiness is learning to enjoy the ride along the way 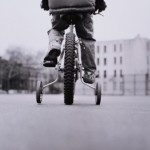